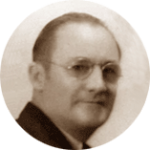 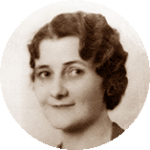 "The greatest job of life is to love and be loved." — R.D. Clyde

I will try and recall for you some girlhood events in your mother’s life. The four Bailey sisters were Lorene, Susie, Elvie and Annie, each with their own personality. For instance, Lorene was mild and seemed to have wisdom beyond her years, she read a lot. Susie was a born leader and organizer; she had an uncanny way of getting things done. Elvie was a dreamer with a vivid imagination, always painting mental pictures. Annie was a happy child, taking life for granted, anxious to please, she was a peacemaker. We were born into a family where LOVE was abundant, love for parents, grandparents, and relatives. Yes, love was predominant in our lives. Regardless of the many different opinions in the home, we had love for each other.

We had one brother we all adored. Poor Owen! I’m sure we embarrassed him at times. In his adult life I recall hearing him tell that he couldn’t even get into a good fight with the boys at school because he had four sisters there on the spot to protect him from the “rough boys” in the school yard. Ha!

Later came our beautiful sister, Mildred. She looked like an angel, but she had a wee bit of an imp in her and a cute sense of humor, too. She died from heart trouble when she was only 21 years old. Her passing brought sadness to all of us. At the time of her passing, she was in California living with your family. Your wonderful parents had someone living with them, either the Bailey’s or the Hoglund’s most of the time. They were generous to give refuge and shelter to all in need.

Violet was the baby of our family. I was 12 years old when she arrived. Your Mother was about 13 ½. Our dear mother had a massive stroke when the baby was six weeks old. Her dreadful illness brought a terrific change into our lives. We were faced with the responsibility of helping to raise that precious infant and keeping the house in order. Of course Grandma Strong was a wonderful help, too, bless her heart. Father hired a nurse by the name of Mrs. Parimore to take care of Mother. At this time, sister Susie came forth with her capable skill or ability to organize the family. She assumed the heavy work herself, sweeping and scrubbing and etc. She assigned the dusting job to Lorene, and believe me, she did a thorough job of it – no dust anywhere after she’d finished. Susie designated the job of setting the table and doing the dishes to Annie and me. We soon learned to accept Susie’s authority as decisive. We managed nicely with the average amount of defiance and argument about some trivia matters, which seemed important at the time. Our precious Father was wise in discerning the situation and solving the problems for us.

When Susie was 12 or 13 years old, she decided she was going to make a blouse for herself, a cotton blouse with a peplum at the waist, a little round collar and puffed short sleeves. She wanted some pretty new material, but Grama Strong was appalled at the idea of buying new material for that child to cut up and spoil! When our Father learned how unhappy Susie was, he gave her the money to buy the material she wanted. Frances Budd, a girl friend of your Mother’s, had her mother (our neighbor, Sister Budd,) help Susie cut out and make her blouse. She used an old treadle sewing machine and did a beautiful job. After that, she could have all the new material she wanted. She made blouses for her sisters, aprons for Mother, and little cotton dresses for Mildred and Violet. I’m sure Grama Strong was as proud of Susie’s ability as if she herself had taught her how to sew. Ha!

I recall a beautiful light blue dress your mother had. She was about 16 or 17 years old. She looked so pretty n that lovely dress. Our family dressmaker, Mrs. Phister, had made it for her. I loved that dress and wished I had one like it. I was invited to a birthday party for a young man in my Sunday school class at his home. His sister told my sister, Susie, that they were giving him the party so Elvie would be there because he liked me. I told Susie I wasn’t going to his party because I didn’t have anything pretty to wear. I was tired of my one best dress. Susie offered to let me wear her new blue dress. Oh! I couldn’t resist wearing that pretty dress. I surely felt elegant in it and had a wonderful time at the party.

We were teenagers then and living in the big home on East 4th South. Here our steady boy friends came to date us. Louis Renshaw was the first one to come to the Bailey home. He introduced Bill Andersen to the family. Billy dated Sue the first time, but then he met Annie and fell in “love at first sight”. She was “His girl” from then on. Albin Hoglund was next to call at the Bailey home. He was interested in Susie and we knew him as Beanie Hoglund. I presume Sue met him in the Hoglund home as she was friendly with his sister, Inez, or, she may have met him through her cousin, Blanche Strong, who was going steady with Al’s brother, Oscar Hoglund. He was known to us as “Poik” then. I’m not sure how they met, but they fell in love and I’m happy about that.

We all loved Beanie (or Al) as we called him later. Oscar told Blanche that his father always called him “Poik” because it means “boy” in the Swedish language. Oscar’s boyfriends nicknamed him “Poik”. Oscar’s younger brother, Albin, followed him most everywhere and he seemed glad to have him along. The boyfriends nicknamed him “beanie” because they said “pork and beans” go together! That’s the story I was told, anyway.

Mrs. Hoglund died when Babe, or Belinda, was a baby. Inez was a young teenage girl and she took the responsibility of raising the baby and looking after the family. I think she and your mother felt a certain kinship and they were good friends. Our father was always telling us to stop calling that boy “Beanie” and to use his proper name, Albin or Al. So, the Bailey family restored Albin’s proper name to him. Later, Blanche decided to call Poik – Oscar.

Charlie Clayton was the last steady boyfriend to join our family. Lou, Bill, and Al fit into the family like they’d been born into it, but Charlie was a shy young man. On his first few dates, he referred to Lorene as “Miss Bailey” as he did each of us, but we called him “Charlie” and before long he felt at home and joined in the fun.

Our home had a large front porch with a wide railing around it. I remember one lovely summer evening Lou and I, Bill and Annie, and Sue and Al were sitting on the porch rail in our favorite spooning places. Over in the corner, by the big rose bush, where Sue and Al were; there was some activity – a lot of laughing and scuffling. It seems that he had something she was trying to get away from or vice versa. Anyway, they both tumbled off the railing into the rose bush. Ouch! The thorns were sharp, but we were all hilarious by then and we laughed until we ached. We had many fun times. I doubt if any young couples had happier courtship days or marriages, either. No divorce in this family.

Of the four girls, sister Sue was the first to be married. Her reception was the most elaborate of any. She and Al were married in the Salt Lake Temple and the reception was that same day in the evening in our home. Aunt Ida R. Strong helped plan and prepare the food for the buffet supper served at the reception. There were salads, chicken, I think, open-faced sandwiches, relishes of all kinds, and cake and ice cream. Each guest took home a little piece of fruit cake wrapped in wax paper and tied with a pink or blue ribbon. It was called “wedding Cake” and was to be put under your pillow so you’d dream of your own future happiness. Ha! The decorated wedding cake was cut and served at the reception with the ice cream, mints and nuts.

Poor Dad had three other wedding receptions to finance not too far apart either. He gave each of us a sewing machine for a wedding gift, too. I’m the only one with the original old treadle machine. The others turned theirs in on electric machines after a few years.

Lorene’s reception was next, then mine, then Annie’s. They were all lovely and we were all married in the Salt Lake Temple with our receptions in the evening. Each one has it’s own very interesting story to tell, but I’m not up to writing it all down. I love to reminisce and to talk about the happy memories in the past, but not write them down. When you reach 81 ½ years of age you’ll understand.

Now back to my story. We always helped one another moving from one house to another. Lorene was the first to have a baby – Raymond. I had my twins two weeks later. Your Mother was real excited when she learned that I had two babies. She said to Aunt Ida, “Oh she can’t have two babies, she’s only a layette for one!” Aunt Ida laughed and said, “Well, Sue, she can always drown one!” That brought Sue back to her normal thinking. Ha!

My dear sister Sue and her fine husband, Al Hoglund, took us into their home several times as we moved about from place to pace. She was so good to help me make dresses for my little Donna. She was married a few years before her first baby came. She named her “Elaine”, a beautiful baby with yellow curls and blue eyes. Your Mom kept you looking like a little doll always! My Donna was a year older than you. I think you were like a baby sister to her. I know she has always loved you and your family. Two more little girls were added to your family, Betty and Shirley. Betty was a beautiful brown-eyed baby with lots of pretty brown curls, and Shirley was a little doll, too, blonde with blue eyes. How your Mother and Dad loved each one of you!

Your precious father, Al Hoglund, was always a special part of the Bailey Family. We were all very proud of this fine, loveable man. He had a wonderful influence in keeping us all active in church work. Bill was his councilor in the Bishopric, Charlie, his Ward Clerk, and Lou, his Music Director. We all had some part in helping serve the Lord in the dear old Garvanza Ward.

I can’t lay aside my pen without mentioning all of the wonderful children this Bailey family has produced – all men and women to be proud of with fine families of their own. I know that the Gospel of Jesus Christ has played an important part in their growth and happiness.

Elaine dear, I hope this is something like you were expecting. I was happy to do it, but it was a challenge! I would rather have talked to you face to face. Perhaps I can still do this when you visit us this fall.

Back to the top